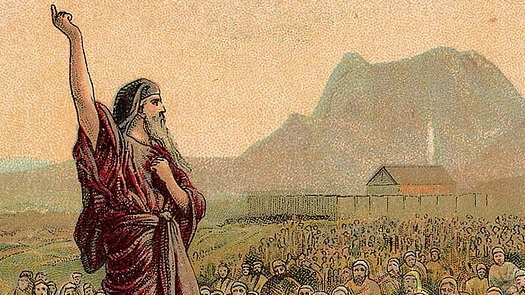 Then Moses went and spoke these words to all Israel. And he said to them: “I am one hundred and twenty years old today. I can no longer go out and come in. Also the LORD has said to me, ‘You shall not cross over this Jordan.’ The LORD your God Himself crosses over before you; He will destroy these nations from before you, and you shall dispossess them. Joshua himself crosses over before you, just as the LORD has said. And the LORD will do to them as He did to Sihon and Og, the kings of the Amorites and their land, when He destroyed them. The LORD will give them over to you, that you may do to them according to every commandment which I have commanded you. Be strong and of good courage, do not fear nor be afraid of them; for the LORD your God, He is the One who goes with you. He will not leave you nor forsake you. (Deut 31:1–6, NKJV)

In Numbers 13, we read that the LORD brought the children of Israel to the Wilderness of Paran, on the southern border of the Promised Land. From here, Moses sent 12 spies into Canaan, 10 of whom feared the inhabitants and instigated the Israelites’ refusal to enter Canaan. Moses interceded for the people and the LORD forgive Israel’s sinful disobedience, but as a consequence, none of that adult generation were permitted to enter the Land except Caleb and Joshua, the other two spies who brought back a good report. Even Moses and Aaron were not permitted to enter the Land because of their unfaithful representation of the LORD at Kadesh (Numbers 20). Our passage today begins Moses’ farewell speech to the second generation of Israel before Moses’ death and Israel entered the Land.

The children of Israel, including Moses and Aaron, suffered severe consequences for their unfaithfulness to the LORD. However, while God prevented the adult generation from entering the Land, He did not forsake His promise to Israel as a nation. The LORD raised up Joshua to lead the second generation of Israelites into the Promised Land. God always keeps His promises. We may not always understand the terms, and we often forsake many potential blessings because of our sins of unfaithfulness and unbelief, but God is always faithful.

I want to you notice two details about this promise that Moses recounted to the second generation of Israelites. First, notice that God promised that the children of Israel would go to war. The Canaanite tribes were strong, numerous, and many would not leave the land willingly. But because of their sinfulness, which included ritual human child sacrifice to the gods Baal and Molech, God dispossessed the Canaanites and promised the land to the children of Israel (Deut 12:29–31, c.f., Jer 32:25). But Israel would have to take possession of the Land by force.

But notice also how God promised to go with the children of Israel. Not just to go with them passively, watching the battle from the sidelines. But actively going before Israel, weakening the hearts of the Canaanites, as well as going behind Israel, protecting the rear ranks which included noncombatants—women, children, and livestock—the weaker, defenseless ranks. Thus, the LORD tells the Israelites not to fear, because the all-powerful presence of Almighty God is among them, fighting for them and protecting them in and through the war.

For me, the daily grind of life is filled with uncountable battles with mixed results—many failures, a few victories, and many stalemates promising to revisit us again in the near future. But, in a similar way that the LORD promised to go with Israel through the war, fighting for her and protecting her, our Lord and Savior, Jesus Christ makes us a similar promise in our war against sin and death. Food was one of my battlefronts. But praise be to God who has given me the victory over gluttony and enabled me to better lead and care for my family in the way I eat, exercise, and prepare meals for our household.

Christ goes before us in our salvation experience and in the daily struggles throughout our lives. Indeed, Christ went before us in death (1 Pet 3:18–20); He went before us in resurrection (1 Cor 15); and He has gone before us into heaven to prepare a place for us (John 14:1–4). So then, we do not fear the final judgment, nor its servants—sin, flesh, and Satan—because the live of Christ has rescued us from the fear of judgment by delivering us from death and giving us eternal life (1 John 4:17–19).